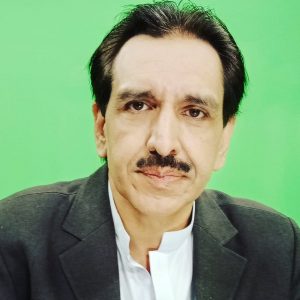 Having over 25-year of experience in the field of journalism, he joined media in 1994 and attained a prominent place among top-notch journalists of Pakistan.
Aqeel Yousafzai is considered an authority on Afghan affairs, militancy across tribal belt, Pakistan-US relations, Pashtun nationalism, cross-border terrorism and military operations, are areas of his focus.
He is an accomplished writer with a number of books on his credit including ‘Talibanisation, ‘Operation Natamam, & ‘Islamabad say Kabul Barasta Peshawar’. His new book ‘War Zone’ is in process and will be available soon.
Aqeel Yousafzai has worked in all mediums of media and a number of national and international media organisations, Press, TV, Radio Tehran, Dutch Press Agency, BBC, to name few.
He has also worked with the Pakistan Institute for Peace Studies, Center for Research and Security Studies and ISPR. So far, he has published more than a thousand columns, investigative reports and articles in various magazines and newspapers. For the past several years, he has been hosting various current affairs programmes at the Pashto-leading Channel Khyber News, including KP Files, Dateline Peshawar and Dateline Afghanistan. There are more than 400 current affairs shows on his credit.
He has also worked with daily Aaj, Mashriq, Osaf, Frontier Post, Express and Akhbar Khyber and won several national and international awards, including APNS.
Tweets at @iaqeelyousafzai
He can be contacted at:Email: [email protected]
Office address: 17-C Chinar Road University Town Peshawar, Pakistan.