On 2 Aug 2022, The Pakistani nation was mourning the martyrdom of six Pak Army officials including Lieutenant General Sarfaraz Ali (Commander XII Corps) in a 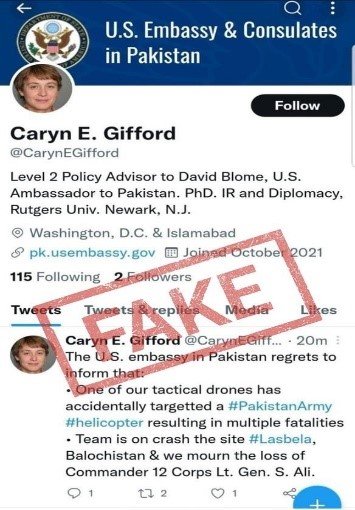 military helicopter crash during a flood relief operation in Lasbela, Balochistan. Amid the consolation messages, homage and prayers for the departed souls on social media (SM); a Twitter user Caryn E. Gifford (@CarynEGifford), speculated that one of the US’s tactical drones accidentally targeted the Pakistan Army helicopter resulting in multiple fatalities.  The account then had mere two followers who claimed to be the level-II Policy advisor of US ambassador to Pakistan David Blome.

Several Journalists and Open-Source investigators labelled the account as impersonated, still, followers of the account jumped to over 700 in a matter of hours and the speculation spread like wildfire creating and augmenting a conspiracy theory. Upon investigation; it was revealed that the account deleted his previous tweets consisting of pro-India narratives, promotion of India-based #hashtags and tweets in Roman Urdu. These pieces of evidence were enough to establish the origin and purpose of the account.

Exploiting the grief-stricken moment in Pakistan, several other accounts, mostly with minimal followers, also claimed that a faction 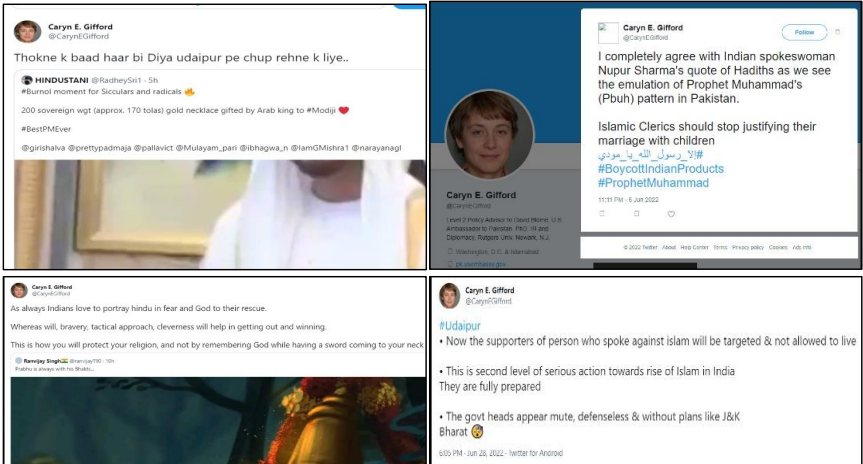 of Baloch rebels targeted the helicopter. The narrative was not only amplified by impersonated or fake accounts but Indian mainstream media also magnified this Fake News.

Thousands of such impersonated accounts persist within Pakistan cyberspace, especially on Twitter and Facebook, for the sole purpose of a smear campaign against Pakistan. According to Facebook, it disabled more than 1.3 billion fake accounts only during the last quarter of 2020.

The phenomenon of SM impersonation for propaganda, fake news and mis/ disinformation campaigns is not limited to foreign hostile actors; political parties, Sub-nationalist elements and militant organizations having their SM arms also apply the same tactic for the vilification of rival parties, groups and, especially, Pakistani armed forces. These elements not only try to damage the overall image of Pakistan as a country but also cause chaos within the populace, either studiously or inadvertently.

Research by several OSINT experts and organizations i.e., Project Baseerat and several other independent SM analysts notes that an enormous number of fake accounts affiliated with hostile countries like India and Afghanistan were used for promoting conspiracies and propaganda against Pakistan. Rackets and coordinated networks, mainly backed by Indian nationals and news organizations, have been unearthed not only by local but international organizations.

Recently; media and communication researchers suggested a massive increase in the use of fake accounts in Pakistan’s cyberspace. These accounts manipulate and frame day-to-day happenings to thwart democratic debates and transfigure public sentiments into hate speech, political unrest and violence, aimed at creating chaos and political instability in Pakistan. The most discernible actors among these hidden enemies are Indian-backed anarchists, impersonated SM activists and SM arms of political organizations. Several Twitter campaigns launched by Indians & Afghans have been recently identified including #CivilWarInPakistan (April 2021) & #SanctionPakistan (Aug 2021) participated by Pakistani disgruntled elements in and outside the country.

After the regime change in Afghanistan in Aug last year; Digital Media Wing Pakistan unearthed a coordinated disinformation and propaganda campaign by 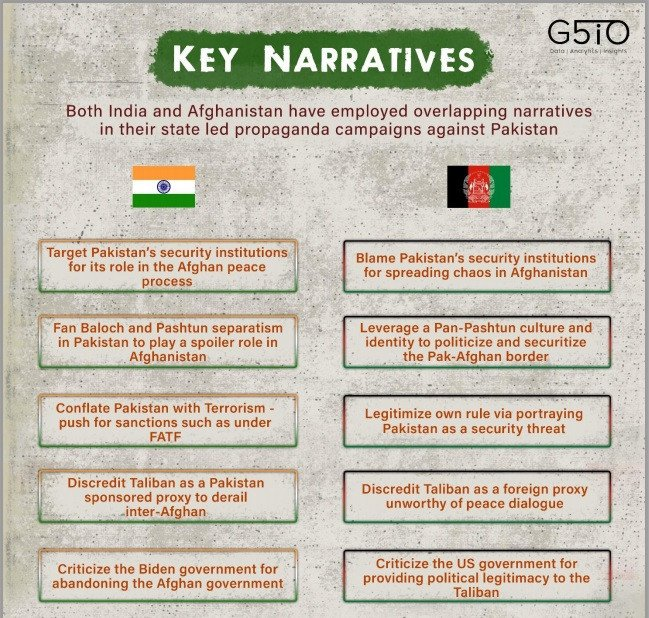 Indians and Afghans to sabotage the Afghan peace process and to put the blame on Pakistan for the mistakes made in Afghanistan during the last two decades.  In a joint press conference (11 Aug 2021), the then National Security Advisor Moeed Yousaf informed that SM Accounts operated by Afghans and Indians launched an SM campaign discrediting Pakistan and its Armed forces. The propagandist also targeted China Pakistan Economic Corridor (CPEC), provoked Baloch and Pashtun separatists, fueled Sub-nationalist sentiments and tried to build a narrative of keeping Pakistan within the grey list of the Financial Action Task Force (FATF). These SM campaigns were mostly boosted through Bots and augmented by Afghan and disgruntled elements in Pakistan.

India not only backs individuals and shadow organizations for running venomous campaigns against Pakistan but, as a state, is also involved in the manipulation of SM platforms. On Aug 2022; former Twitter security chief Piter Zatko exposed the Indian government’s hostile design while lodging a formal complaint to the American authorities. Zatko believed that the Indian government had forced Twitter Inc. to put one of its agents on payroll with access to sensitive users’ information. The complaint statement said that several Kashmiri activists and media person’s accounts remained blocked due to India’s frivolous legal objections. Pakistan has already expressed serious concerns over the Indian government’s attempt to infiltrate the security system of the SM giant. 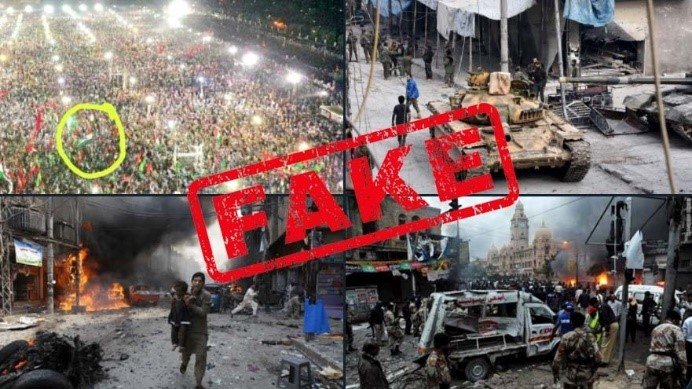 from abroad and paid bots targeting the local population. According to the head of Pakistan Telecommunication Authority (PTA), 400 impersonated accounts are being reported daily by the body to the concerned SM platforms. Most of these accounts are used in disinformation campaigns and for augmenting negative propaganda against state institutions. Pakistani SM users are under the influence of organized and well-coordinated SM campaigns (mainly Twitter trends) and local users unaware of the nefarious designs of hostile actors become part of these campaigns causing more damage to national cohesion and political stability.

Combating SM impersonation, Fake News, Misinformation and negative Propaganda emerged as a primary challenge, not only for Pakistan but modern democracies and developed nations also face the same challenge struggling for finding ways to cope with the trend on SM platforms and mainstream media as well. The United States and several other countries undertook several laws and regulations considering SM impersonation as a crime. Pakistan has also enacted such laws, but the real challenge is unmasking the culprits behind these fake accounts.

One way forward is the use of Open-Sources investigation techniques but its scope is very limited owing to the privacy policies of SM giants. It also requires highly technical skills and qualifications in the field of information security. Another way to combat impersonation is the submission of identity documents as a prerequisite by the platforms which can effectively prevent the creation of fake accounts. But business interests and alluring maximum users for the same interest of the platforms protect the real identity of the impersonators. Another more effective way to cope the fake accounts is mass reporting against Fake accounts by SM users and regulators including Pakistan Telecommunication Authority PTA. 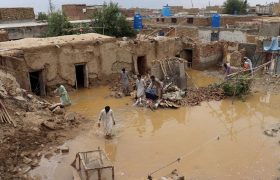 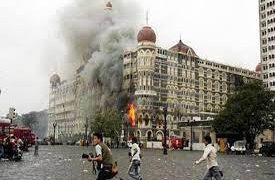 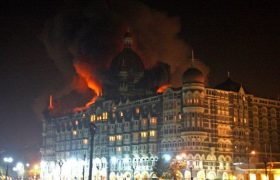