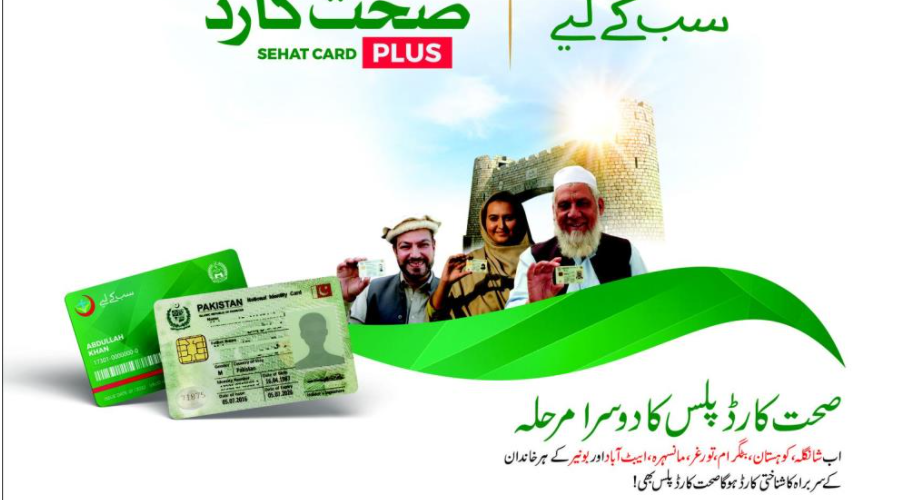 The SehatSahulat Program waslaunched in 2015 with an objective to provide the best medical and health care services to the underprivileged citizens of Pakistan through a free micro health insurance scheme. SSP was initiated to ensure Pakistan’s compliance to SDG-3 “Ensure healthy lives and promote wellbeing for all, at all ages”. The SSP (PLUS) was launched in 2020 with an aim to cover all permanent residents of KPK (excluding merged areas) for free health services regardless of their financial status. CNIC acts as Sehat Card and covers financial expenses up to 1 million. The primary goal of SSP is to improve the health status of the targeted population through increasing access to quality health services and to reduce poverty through reduction of out of pocket payments for health expenditure in KP.

SSP covers Secondary and Tertiary Care only. For the purpose a total of 1million rupees per family have been injected by the Government of KP in this scheme. The current population of KP is 35 million which has been divided into 7.19 million families with an average of 5 persons per family. A whooping 20.7 billion PKR has been paid to SLIC for the implementation of this project.

Diseases Covered By The Program

There are people who are currently one medical bill away from poverty. The aim of SSP is to improve the health status of the targeted population by subsidising their medical treatment. Furthermore, SSP aims to Increase access to quality health services by including private sector hospital under this program.

Initially, there were two separate programs that were covering the health insurance. The first one was called SehatSahulat Program, launched in 2015 by KP government but that program covered limited population. The second one was called Prime Minister Sehat Program that was implemented on federal level. The SehatSahulat Program Plus has been launched in 2020 with an ambitious plan of covering 100% population of KP. SSP Plus is different from the previous two programs in three ways viz.  Firstly, it will cover 100% population of KP. Secondly, the amount allocated for medical treatment under SSP Plus is 1 million PkR and thirdly, there is no need of registration as the data of entire KP CNIC holders has been linked with their CNIC.

The SehatSaholat Card has already been issued in 6 zones. Similarly, a total of 7.19 million Families have been made eligible to avail this facility. As of today, people that have visited hospital while using SehatSahulat Program accounts for 1530236 visits with a Satisfaction Rate of 97 %. The SehatSaholat Program is operational currently in 50 districts throughout Pakistan. People can check their inclusion in SSP be sending their CNIC to8500, 9780 and it covers all the residents in KPK. The residents of KPK don’t need to register online or verify their eligibility for the program. Government and private medical facilities mentioned in the list of empanelled hospitals (177 Hospitals of KP, 46 Public, 133 Private). Part of SDG 3 (Ensure healthy lives and promote wellbeing for all, at all ages). There are three parterres that are working on this project, Khyberpakhtunkkhwa Government, State Life InsurranceCompany and KFW (German Bank). KPK’s SSP and Canada’s Medicare are formulated on the same foundations. However, it is different from BISP. While BISP distributed cash money in needy people, SSP aims to lower the power by subsidizing the medical treatment.

Based on interviews and observations, data was collected and analyzed as following.

Initially people were not properly aware of the SehatSahulat Program (SSP). They believed that the government had deposited the money in their accounts. People demanded cash instead of treatment. They believed that in case of not withdrawing it, it would lapse in a year. This was a main issue in implementation of the program.

However, now people are aware, and this issue has been tackled to a large extent.

There is only Prime Minister SSP in tribal areas. The newly program SSP(PLUS) launched by Provincial Government Khyber Pakhtunkhwa is not extended to merged areas. Some people are demanding health facilities under that program which is not yet extended. This has created problem in implementation of the already existing program i.e., PM SSP. It is pertinent to mention that PM-SSP is offering 0.36Mn on annual basis to a family in NMDs and the SSP (Plus) is offering 1.0Mn to all families of KPK other than NMDs.

Many newly families are formed but the SSP is still relying on old data (almost 5-years old). The newly formed families are now detached from the older one. As a result, they neither have their separate health card nor they can use the older one. This has created a problem in implementation of the program in letter and spirit.

When patient come up with such disease which has no rate list, the SSP staff is supposed to approve that rate list from higher authorities. This can take sometimes. Consequently, the patient is suffered. This is also one issue in the implementation.

Many people in rural areas still rely on DHQHs because it provides more facilities. However, lots of DHQHs are not included the list of hospitals under SSP such as DHQ Hospital Timergara, Dir Lower. By doing so, doctors in DHQHs have no incentives except their salaries. The doctor as well as patients prefer private facilities for their treatment. This has not only overburdened the private facilities in term of implementation, but also devalued DHQHs.

One issue in implementation of the program is that some doctors prescribe sub-standard high costly medicine. This is because that the cost of medicine is ultimately paid by State Life Insurance Company not by the patient. This practice is more common in private health facilities because there is one man show and this is very against the spirit of policies. In DHQHs level, such as in Bajaur, the MS said that we were considering this issue time and again and they are discouraging doctors from such malpractice.

In areas where DHQHs are providing facilities under SSP, people consider private hospital better than DHQHs. This is because that people have developed negative perception of DHQHs, and they rely on private treatment. However, the fact is that DHQHs are also providing quality treatment under the program. This is causing issue in implementation of SSP at DHQHs level.

Some doctors avoid facilitating patients under SSP because the amount incurred on such treatment is paid back by State Life Insurance after long times. For instance, one doctor in Bajaur is to be paid 1.4M by the State Life yet. Similarly, one Doctor in Lower Dir has not yet paid by State Life since March 2020. This leads to creation of dissatisfaction among doctors’ community. Moreover, many private hospitals are giving fees to doctor on the spot and the private hospitals receive it later from State Life Insurance Company. As a result, malpractice is evident in many such cases.

in world class centers of other provinces like IKD, SHOKAT KHANUM and AGHA KHAN UNIVERSITY hospital. Therefore MOUs need to be signed with them for complete health issues coverage of the citizens.

The SehatSaholat Program was initially launched by government of K.P in 2015 that targeted limited population. The program has been upgraded and renamed as SehatSaholat Program Plus in 2020 that provides free medical treatment for secondary and tertiary care. A total of 20.7 billion PKR has been injected in this project and each family will avail free medical treatment up to PKR 1 million. The amount has been divided into 3 categories viz. secondary care for which 200 thousand PKR limit has been fixed for a family of five persons, 400 thousand for tertiary care and the remaining 400 thousand has been termed as top up amount and to be utilized only once the initial 600 thousand PKR has already been exhausted. There is no registration for SSP and the data has been linked with CNIC.

However, the SSP is in nascent stage and is currently facing a lot of problems. It suffers from meager human resource, lack of legal cover and no autonomous body. This project would take some time to find maturity and it is too early to judge and evaluate a project of this magnitude. The project would be a lot more efficacious if the aforementioned problems are timely addressed