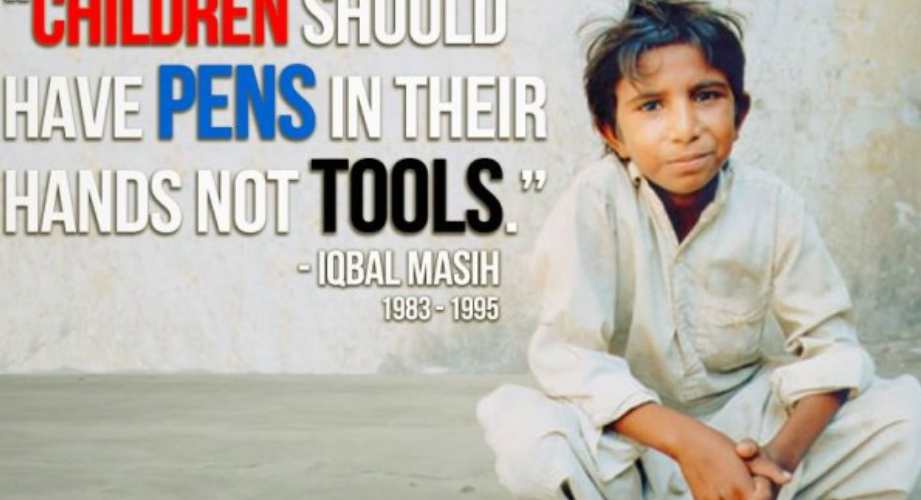 Pakistan has an estimated 3.708 million child labourers in the 10-17 years age bracket, according to Labor Force Survey (LFS) 2014-15. Child labour has been in existence since the dawn of human civilisation and has subsisted because it is economic indispensability for many families living in impecuniosity.

There is a plethora of verbalisation exists about this dilemma of child labour in the media and our society. However, we still optically discern children being coerced to work in perilous conditions and at a puerile age in factories, repair shops, agricultural fields, for domestic purposes.

Like any other socioeconomic problem, child labor has many causes. Lack of access to compulsory and free education opportunities, infringed subsisting laws along with weak code of conducts are among the key reasons driving the child labor culture in third world countries like Pakistan. Economic deprivation and poverty however remains the chief contributing factors.

Effects of child labour are disastrous for the country and children both. With continuation of this age old issue, Pakistan has suffered on diplomatically and economically. Child labour issue prevented Pakistan from earning valuable foreign exchange through the exports of carpet. Pakistan’s carpet industry, in the past, used the children as work force, often in poor conditions.

Apart from that, it has been observed that child labor often usher another problem of violence against children. Many such cases has been reported in recent times. Last year in June 2020, eight years old domestic worker Zohra Shah was killed by the couple Hasan Siddiqui & her wife Umm e Kulsoom. Finally, child abuse is also related to child labor.

Though Pakistan has passed the laws in an attempt to curtail the problem of child labour and to indenture servitude, but those laws are completely ignored by many businesses particularly in SME (Small and Medium Enterprises) sector.

Apart from government efforts, there are many NGOs working on this issue. “Save the Children” is one of these. Effort made by Save the Children are aimed at ascertaining to put an end to child labor. It has been working with some of the sports goods manufacturers to ensure that children are not employed at sport goods factories. Some others NGOs are also active for this purpose. Awareness regarding the employment of children in homes, shops, and factories must be spread to discourage such practices.

Pakistan would need a holistic approach to combat this socioeconomic evil. All stakeholders will have to be made part of a public-private drive. Parents, businessmen, NGOs, media and lawmakers will have to work closely to tackle this issue at different levels. At top, lawmakers need to concentrate on providing enough economic opportunities for children and their parents so that they do not have to resort to working illicitly in order to get money. Once that done, a law must be introduced with punishment for parents who still force children to work.

On another level, the social security programs by the govt. including, Bait-ul-Mal and Zakat programs should be reinforced and promoted to give benefits to a maximum number of poor families.

On legal dimension, the government must remove all the lacunas in the legal framework of the country which culprit of child abuse often use to safe their skin. It is high time for government to start penalising the culprits of child labor. Save the invaluable and priceless youth by paying for their education instead.

Finally, providing quality edification to all children must be top priority of government both at federal and provincial level.

NGOs and media must act as watchdogs; keeping eye on patterns of child labor in the country and raising awareness about it and its possible adverse effects for children.

Efforts should be made to forfend the children of our future from child labour which includes child abuse. Let’s stop child labour together. It is a tough issue to tackle, but we require to get the ball rolling as in the recent times, child labor and related issues, once considered as astronomical quandary, has been forgotten as the world has moved on.