The death of Usman Khan Kakar, a prominent leader of Pakhtunkhwa Mili Awami Party and Senator, has been mourned by people from all walks of life. However, certain political and ethnic groups use his death for peddling their own agendas by declaring his death, a murder. For their political point scoring not only the established nationalist groups, but also new entrant, Pashtun Tahafuz Movement (PTM) also used the death of Usman Kakar.

PTM convoy led by Manzoor Pashteen not only raised controversial slogans, but in addition, carried Afghan flags in the funeral procession. These actions turned a tragic event into a political one replacing the feelings of mourning with hostile posturing against the State, on ethnic lines. The PTM supporters and certain foreign elements tried to propagate Usman Kakar’s death a murder; however, in a press conference the Balochistan Home Minister Zia Langu dismissed the allegations, citing a medical report.

He made it clear that the government is ready to investigate the death of Usman Kakar at all levels. Despite this clarification and assurance to probe the incident, the usual blame game by PTM leaders and supporters continues. On Monday June 28, 2021, the Chief Minister of Balochistan, Jam Kamal Khan visited residence of late Usman Kakar at Muslim Bagh and met his son Khushal Kakar and other family members. The government of Balochistan reiterated that impartial investigation would be carried out, if family of the deceased senator wants to probe the murder allegations.

The Government of Balochistan also has formed a judicial commission to probe the demise of prominent political leader Senator Usman Kakar.  In this regard two honourable judges of Balochistan High Court have been nominated for judicial inquiry. 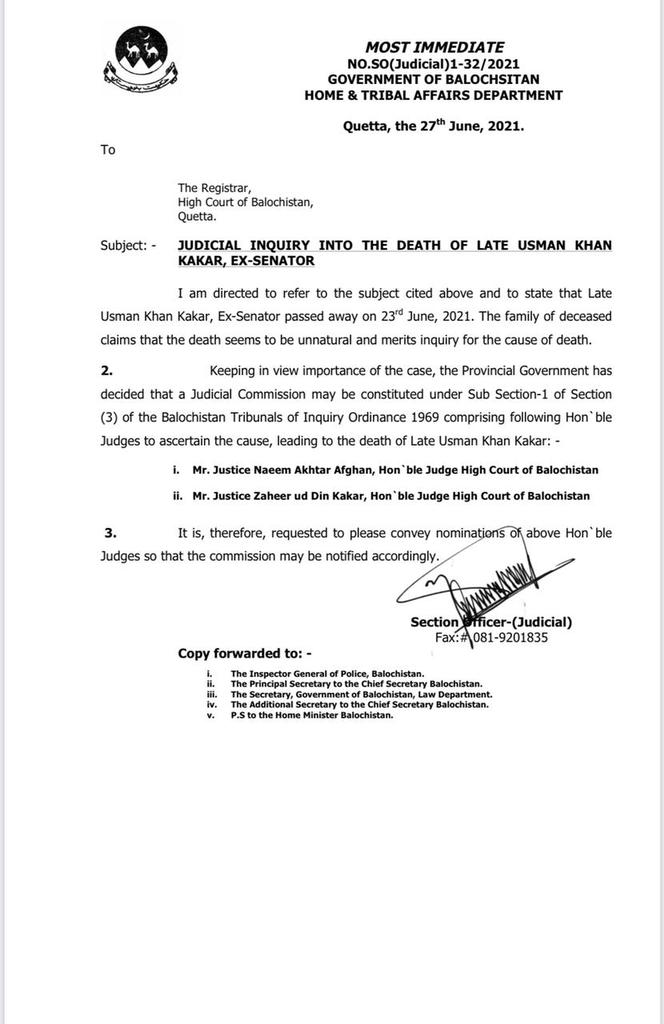 The allegations that Usman Kakar was murdered started pouring in from the first day, the evening of June 17, with posts by certain individuals on social media. Media reported that his family members and party leaders kept saying in response to contacts during his hospitalisation that Usman Kakar was suffering from low blood pressure and that he had witnessed this situation several times before. While some foreign media outlets deliberately tried to coerce the late Kakar’s son and some party functionaries into making certain utterances, creating hostility wherein the state institutions were also dragged.

As soon the news of sad demise of late Senator Usman Kakar was broadcast on media the leader of PTM, Mohsin Dawar declared on social media, Usman’s death, a murder citing claims by his family members. An unfortunate precedent was set by turning a funeral into a political stage by raising irrelevant slogans that had violated the sanctity of the deceased.

On the other hand, those elements who are looking for an opportunity to score a point against the State of Pakistan also tried to take political advantage of this incident through allegations of murder. This entire episode on the one hand had made the death of Usman Kakar controversial, but also taken aback many of his supporters.

Raising the separatist slogans & bringing Afghan flags to the funeral has made even the admirers of Usman Kakar to condemn it. Many admirers of Usman Kakar expressed their displeasure. In such a situation, the nationalist elements must understand that in this digitalised era, it is difficult to sell one-sided claims and allegations. Certain ethnic groups routing for nationalist causes in the name of Pashtuns have to come down to ground realities. If they really want peace and prosperity for Pashtuns, then they have to be responsible enough to understand the situation on ground and some serious regional challenges instead of driving one-sided agenda.

The situation in Afghanistan after US withdrawal is also uncertain carrying a lot of concerns with regard to peace, militancy in the region including Pakistan. Many observers fear fresh influx of refugees in neighbouring countries from Afghanistan, specially into Pakistan.

Such a scenario, Pakistani merged districts of Khyber Pukhtunkhwa may witness massive surge in Afghan refugees, which may not set well with these same ethic groups one way or the other.Therefore cashing on incidents like death of prominent Pashtun figures or common Pashtuns is not a wise move in the longer run.

Pashtuns on both sides of Pakistan-Afghanistan international border can no longer afford hostility spreading out of these anti-Pakistan sloganeering, hoisting  certain flags and ethnic card.