PESHAWAR: Death toll due to Covid-19 swelled to 1,114 with passing away of eight more persons as the province continued to record fewer cases for the past one week with officials attributing the declining trend in positive patients to the smart lockdown enforced in the hotbeds of the virus.

The number of cases has on decline since July 2 when the province recorded 250 cases. Except last Sunday`s 408 cases, the number of patients remained below 300 through the last week. On Monday, only 261 cases were reported. Before July 2, the province conducted an average 3,000 tests per day.

Testing figures from July 8 to July 13 remained 2,411; 2,366; 2,267; 2,392; 1,931; and 2,098 that showed a drastic decline. However, officials said that it was result of the less passivity of the patients, mainly owing to the smart lockdown imposed in hotbeds of the virus-infected districts. `In case of more positive cases, we collect swabs as part of our strategy of contact tracing during which we test at least 10 persons in the families and neighborhoods of the confirmed cases,` they said.

Officials said that decrease in number of patients reduced need for contact tracing and their testing.

They also lauded the smart lockdown strategy adopted by the government under which areas reporting certain number of confirmed cases were sealed for a fortnight and entry and exist points were closed.

`So far, the strategy of smart lockdown is very successful in Peshawar district and cases have drastically come down as result of sealing off the localities and areas on the basis of caseloads,` Deputy Commissioner Mohammad Ali Asghar told Dawn.

He said that as for as smart lock-down was concerned, it was a complex procedure based on heat maps of positive cases but the approach towards coping with the pandemic was paying off in the shape of reduction in cases.

The district administration is enforcing lockdown in three other areas from 3pm on Wednesday (today). A statement said that entry and exist points in Gulbahar No 3, Regi Badezai village council and Bakarkhel Hasankhel subdivision would stay closed till further orders. Smart lockdown is already in progress in Phase-III of Hayatabad Township where the sport complex is open while some shops also receive customers.

Health officials said that it was the job of district administration to enforce lockdown. They said that they were only recommending lockdown on the basis of cases.

DC Mohammad Ali Asghar, however, said that they only quarantined individuals in their houses and enforced lockdown on the recommendations, which were received from district health of fice. `We are making sure that people remain indoors during lockdown that`s why cases are decreasing,` he said.

Health officials told Dawn that they used to seal the houses in case of a positive case but as the people were cooperating and they didn`t need to do so anymore.
Source: Dawn 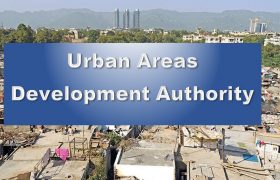 Authority set up for development of urban areas